You are here: Home / News / Therapy Success for Nolan!

Emily and Ron Levy were just getting used to parenting when they found out that they were going to have their second child. Kennedy, their little girl would be a big sister at just 12 months old. Although this was not in the plan, the family was going to grow and they were excited. Their second child, a son named Nolan, was born with a long, but uneventful labor and now they were a family of four.

The family was getting into a nice routine and the kids were both progressing on schedule until Nolan was about nine or ten months old.

“We started to notice his eye was crossing and it was discovered he had amblyopia or lazy eye so we started to treat him for that,” Emily said. “Turns out that was only the beginning.”

At a little over a year old, Nolan’s vision began to decline and so did his progress on his growth and milestones. At this time, the family’s physician recommended they have him assessed through Help Me Grow of Marion County. Sure enough, Nolan was experiencing some developmental delays and was eligible to receive services from Help Me Grow and the Marion County Board of Developmental Disabilities (MCBDD) Early Intervention (EI) program.

“Early intervention has been a huge support for us. We consider Angie part of our family,” Emily says of Angie Meade, Developmental Specialist in the Early Intervention program at MCBDD.

Nolan was on a strict schedule of occupational and physical therapies to get him back up to speed all while new diagnoses and developmental delays were being discovered. Nolan, now three-and-a-half, has been diagnosed with a genetic mutation of the COl4A1 (collagen) gene, they have found that he likely had a stroke in utero causing cerebral palsy (CP), the above-mentioned amblyopia or lazy eye, as well as optical nerve palsy which means he will never have peripheral vision in the right eye. He also was experiencing speech delays.

The family has been very open to any and all suggestions to help Nolan on his path. In fact, their outpatient therapists went to training and learned about a neuro-optometrist who was using light therapy treatments to treat concussion patients. He also mentioned treating children with neurological disorders. They thought of Nolan immediately and passed his name and information on to the Levy family.

The family did some research and decided to try it. The doctor’s name is Dr. Steven Curtis and he specializes in helping patients who suffer persistent vision disturbances after brain injury including concussions and stroke. His methods were certainly unique to traditional therapies, and there was no guarantee that Nolan would react positively to the treatments, but they decided to give it a try.

Nolan was only two years old at the time and it was an intense schedule. They traveled to Columbus every day for 12 days of treatments and then continued an 18 day, twice a day, regimen at home.

“It’s was time-consuming and expensive, to say the least as insurance did not cover this type of therapy, but this is our child and we are going to do whatever it takes to provide the tools to help him grow and thrive,” Emily said of the investment.

After working hard and following the doctor’s orders closely, the family was thrilled with the results.

“Going into this knowing that we had one shot at success and also knowing that it might not work at all was a risk. We were nervous and scared, but we are so happy we made the choice to try light therapy,” Emily said.

Nolan responded mostly with major improvements to his speech. Emily said that before light therapy he had a vocabulary of roughly five words. Now, he is saying full sentences.

Fast forward to now and Nolan is doing great! He has aged out of the MCBDD Early Intervention program and only receives follow-along services with a Service and Support Administrator (SSA) from the County Board of DD at this time.

He attends preschool at Head Start. There, he continues to work on his social skills and receives occupational, physical, and vision therapies. The School of the Blind also comes periodically to provide special instruction for Nolan. He is making new friends at school and continues to thrive at home with the love and support of his family, especially his biggest fan, Kennedy who is a great big sister, protector, and friend.

Because of Nolan’s hard work and his family’s strong commitment to his development, Nolan is completely caught up on his speech and in many areas has exceeded his age in speech. He went from being completely nonverbal to surpassing his milestones in one year’s time. Amazing progress and the family could not be prouder. They credit light therapy for this miraculous improvement.

“We know that Nolan will likely need therapies for the rest of his life and this will likely require support from MCBDD down the road. We are thankful that they were there at the beginning of this journey and it is comforting to know they will be there throughout Nolan’s life as we need them,” Emily said gratefully of MCBDD.

Frank’s Ability To Lose Weight Was Far From A Disability
Next Post: Business Donates Shields for DD Essential Workers 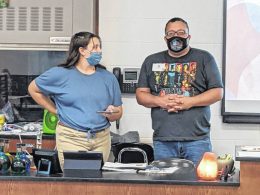 Julia Conner, a sophomore at Galion High School, took her Chemistry assignment to a whole new level with a wonderful “show and tell.” The lesson for Mrs. Tyree’s Chemistry class was to research the chemistry of something and then report on the findings. Julia chose the Chemistry of Autism. Her father, Alan Conner, is employed … 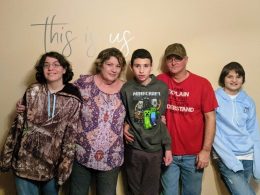 Love Concours All Rebecca and Lance Harris had come to the realization that their blended family was growing up. The last of their four children were 14 years old, and the house was getting quieter with less bustle. Empty nest syndrome was setting in for the couple as they realized the overwhelming calm in their … 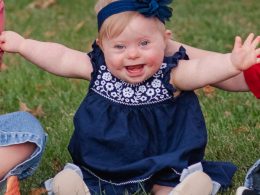 Grace Long is served through the Marion County Board of Developmental Disabilities Early Intervention program in partnership with Marion County Help Me Grow. Grace’s journey has only just begun as she was born in July of 2019. In her short lifetime, her parents, Nick and Amanda Long, have learned many lessons. They are telling their story to …