You are here: Home / News / Hard work (and family) know no bias

Dan Cassell was born with a developmental disability, so he and his family understood from the very beginning that Dan would always have to work twice as hard as most people. He had to work twice as hard to walk, to talk, and to fit in with his peers. His mother instilled this hard work ethic at birth – not just for Dan, but all of the kids. Because of this, it was not surprising to his family that he began to solicit lawn-mowing jobs in his early teens to make money.

The Cassell family was a military family with six children. Dan was number four in the lineup and was born in England. After their father’s time in the service ended, the family moved to Marion for a good paying job they heard about at Marion Power Shovel. Mom was a nurse. Dan was four at the time.

Two of Dan’s sisters, Cheryl Pfeiffer and Diana Trefzger, who assist him with finances and transportation spoke fondly of their “little” brother, now 54.

Diana recalls their move to Marion and how beneficial the school program through the County Board of DD was for Dan.

“He was not walking or talking when we moved here. He would crawl and point. After only a few weeks at the school out here, he was walking and talking. It was amazing,” she recalls.

As Dan thrived to achieve, at home, he was just one of six children. Cheryl said, “Work was normal in our house. We all shared chores. Dan did not receive any special treatment and I think that was good for him. He started his lawn mowing business at 13 or 14 and has been working ever since.”

Dan sat back with pride and listened to his sisters’ talk about his many achievements. They mentioned that Dan has always been very self-sufficient.

Cheryl added that he was one of the very first in the state of Ohio to purchase a home through a program to help those with developmental disabilities afford and purchase their own homes. He bought his house seven years ago and has never missed a payment. “He’s very responsible,” Cheryl said.

“I like to make money,” Dan said when asked what he likes about his current job with Cummins Facility Services. He added that the people are really nice too.

Dan does a great job and Cummins Facility Services said that he is an asset. The Marion County Board of Developmental Disabilities does provide some job coaching to support Dan and agrees that he is doing a great job.

Beyond work, Dan said that he wants to travel. He would like to visit Dollywood, Graceland, the Statue of Liberty, and visit his birthplace of London, England. His sisters are helping him to budget and save so he can start to check off his traveling “bucket list.”

At the Marion County Board of Developmental Disabilities, the mission statement is to help people live, learn, and earn in Marion County.

It’s possible that this statement was written with Dan in mind. To see him and his sisters interact is heartwarming. The love and admiration among the three of them is apparent. There is a mutual respect. Dan said that he really likes having his family here locally. Not only do they help him when he needs it, they are a shoulder to lean on and a friend – no matter what.

Dan is just a normal guy who needs a little bit of help from his family and his community to succeed – and he is doing just that. 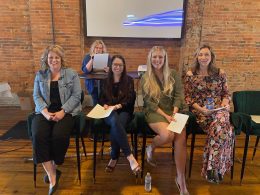 FOR IMMEDIATE RELEASE The Marion County Board of Developmental Disabilities (MCBDD) Family Support Group held an event with close to 200 caregivers and parents. The event was titled, Lifting Up Disabled Families – from Surviving to Thriving and delivered a message of inspiration, compassion, and hope. Organizer Lindsay Criswell, Owner of Branch & Stone Studio, … 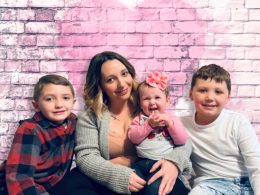 This is Me. More than DD. After having two sons, Kelli Love gave birth to her first baby girl, Elliana Burns. She was thrilled to add a splash of pink to the family dynamic. The pregnancy was uneventful, and the delivery was standard, so the family seemed to be rounded out nicely, and Kelli was … 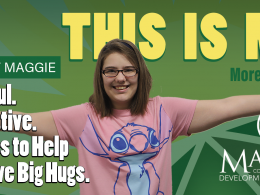 Maggie Purvis Story Both Maggie Purvis and her parents consider themselves lucky for several reasons. First, they are lucky that family circumstances turned Maggie’s aunt, Vanessia Purvis, into her mom. They feel lucky that Maggie is who she is, and they feel lucky to have a loving, caring environment for Maggie to grow up in. …